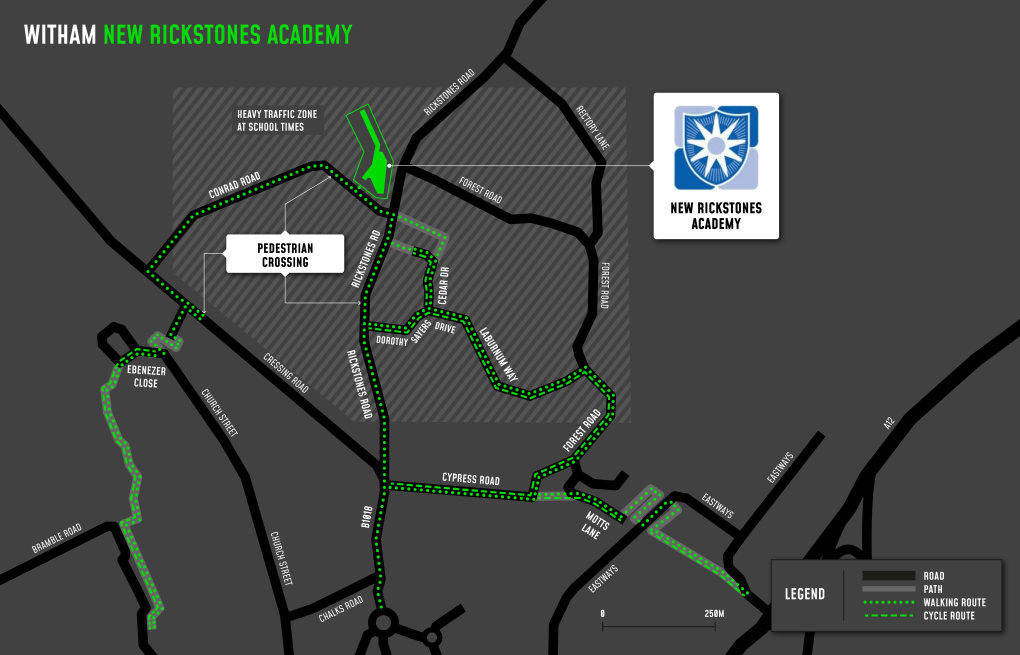 Getting to and from New Rickstones Academy

New Rickstones Academy is on the edge of Witham, with residential estates on one side and farmland on the other. The estate next to the school has a footpath cutting through it, allowing direct access on foot away from any main roads. Directly outside the school is a zebra crossing  and there are other zebra crossings on the busier roads nearby including Cressing Road and Rickstones Road.

New Rickstones Academy is not far from National Cycle Network Route 16, which runs through the centre of Witham. This includes a foot and cycle bridge over the railway. The residential estates around the school have shared-use routes for cyclists and walkers. Witham is not that big so the quickest way to get across town is often on a bike. The zebra crossing directly outside the school is also handy for cyclists.

The 38 and 38A services run directly past the school, onto the rest of Witham and then Braintree. This route serves a lot of villages between the towns including Rivenhall, Silver End and Cressing. There are stops for these service directly outside the school in both directions, with raised kerbs to assist getting on and off. Less than a mile away is Witham Station, which has plenty more bus services for Witham and villages like Terling, White Notley and Wickham Bishops.

It’s under a mile walk to Witham Station and can be walked in an almost straight line, minimising the distance involved. The station is an important stop between Chelmsford and Colchester, stopping at smaller stations like Hatfield Peverel, Kelvedon and Marks Tey. Greater Anglia offer discounts on train travel for students at some schools.