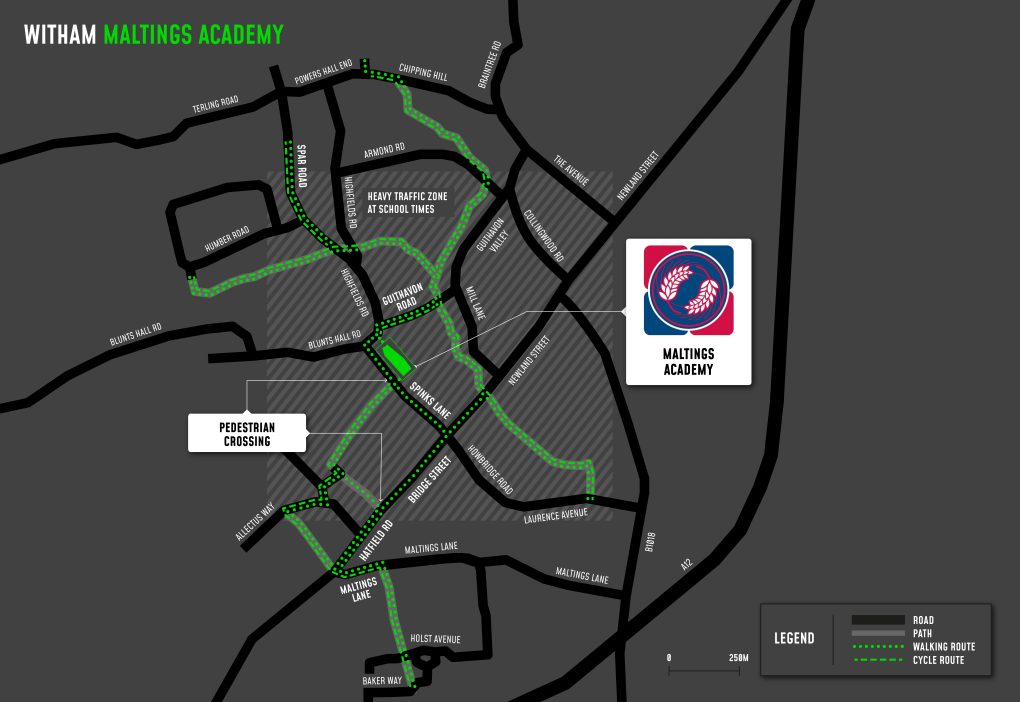 Getting to and from Maltings Academy

Spinks Lane is a long and straight road with a zebra crossing directly outside the front entrance to the school. There’s another pedestrian entrance just around the corner, on the northern side of the school. There are plenty of footpaths and alleyways around the neighbouring residential estates, plus those linking up with the town centre and Witham Station.

National Cycle Network Route 16 runs next to Maltings Aacdemy, along Spinks Lane and Blunt Hall Road. The route goes through Witham, heading past the station and a number of retailers up to Tiptree, Braintree,Maldon and some smaller villages. The academy has a large covered cycle store to keep bikes secure during the day. This is easily accessible from the main school entrance on Spinks Lane. The zebra crossing directly outside the school is also handy for cyclists.

The 39 service runs directly past the school and round west Witham, taking in many housing suburbs and the town’s railway station. The nearest stop is just down the road, outside the leisure centre. About 400 metres away are plenty more services heading into town which  link to Chelmsford, Colchester and a large number of villages in between.

It’s well under a mile walk to Witham Station on suburban roads with good pavements. The station is an important stop between Chelmsford and Colchester, taking in smaller stations like Hatfield Peverel, Kelvedon and Marks Tey. Greater Anglia offer discounts on train travel for students at some schools.