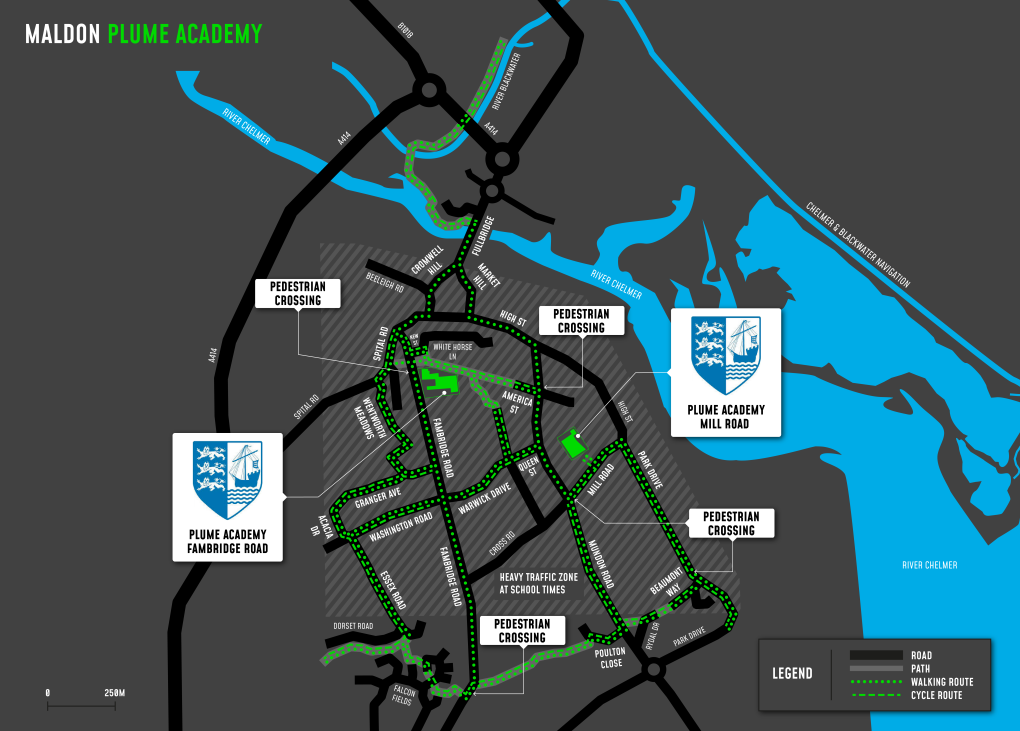 Getting to and from Plume Academy

Plume Academy has two campuses in Maldon, barely 200 metres apart and both very walkable. The Mill Road Campus, for Years 7 and 8, is surrounded by housing and the roads have pavements on both sides. There are various footpaths cutting between the houses allowing students to walk the shortest routes to school.

On the Fambridge Road Campus, for Year 9 to11 and sixth form, there’s an extensive network of footpaths crossing through the nearby park and various cut-throughs behind Maldon High Street. Fambridge Road also has a zebra crossing directly outside the front entrance.

Behind the Fambridge Road Campus is a large network of cycleways heading through the park. These also work for students riding to the Mill Road Campus from the west.

Only a couple of hundred metres from both campus’ is Maldon High Street, which is part of the National Cycle Network Route 1. This runs around the Heybridge Basin and through the town, connecting up with Chelmsford. Cyclists to the Mill Road Campus also benefit from a road chicane so they ride straight through without having to give way to cars.

Being so close to the centre of Maldon means both campus’ benefit from access to good bus services. These serve all the rest of the Maldon and Heybridge, as well as Chelmsford and the many villages either side of the estuary.

Fambridge Road Campus in particular has bus stops on either side right outside the front of the academy and zig-zags preventing parking at the bus stops.