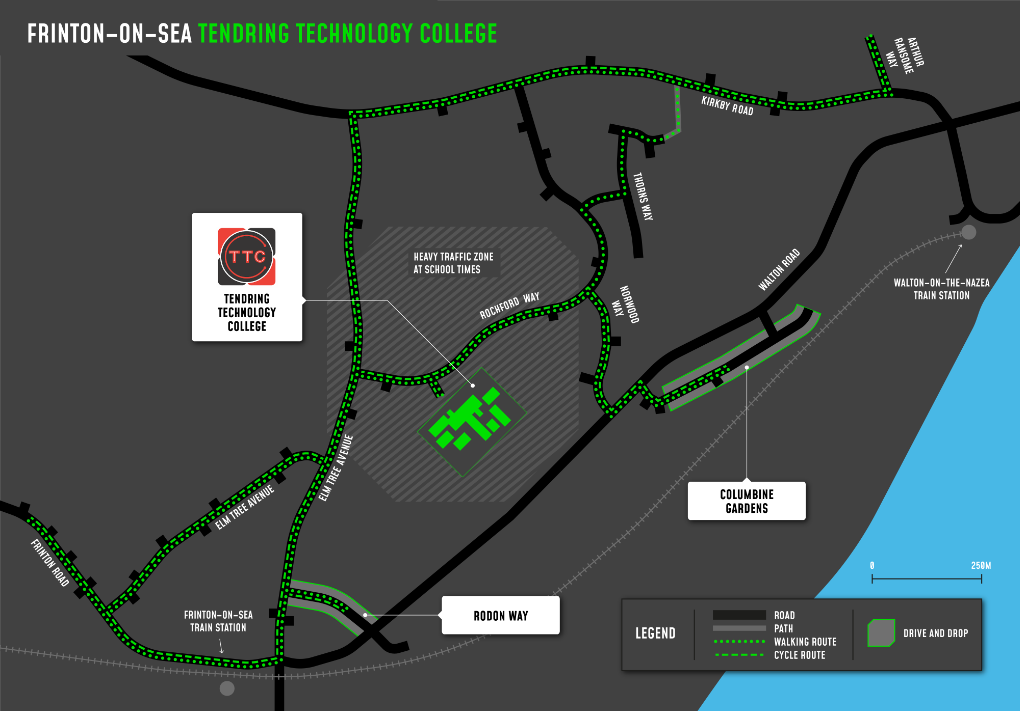 Getting to and from Tendring Technology College Frinton Campus

The highlighted heavy traffic zone on the map shows the area that will have the heaviest traffic at college time. By using alternate routes and a mix of walking and cycling, you can avoid sitting in traffic and being late for college.

Because of its central location, the Frinton campus isn’t much more than a mile and a half from anywhere in the Frinton to Walton area, meaning it’s well within walking distance for the majority of students. There’s a tarmacked footpath along the western side of the school through the local park, and plenty of footpaths cutting through the estates from all sides. There are plenty of crossing islands on the busy Elm Tree Avenue, helping students walk to school safely.

The main roads near the school are pretty straight, meaning both cyclists and drivers have good sight-lines to help them keep safe. This includes the road coming up from Frinton-on-Sea station, less than a mile away. A similar distance away is the National Cycle Network route 150, which runs all the way down the coast to Clacton.

There are plenty of bus services going right past the front of the school, heading round Frinton, Walton, Kirby and connecting to the train station. The Triangle shopping centre opposite the school has bus stops in both directions.

Frinton train station is only a few hundred metres away and there is a pavement the whole way. Frinton station connects to Colchester, Kirby, Thorpe, Weeley and Wivenhoe. The line has a level crossing by the station to help with safe crossing. Greater Anglia offer discounts on train travel for students at some colleges.