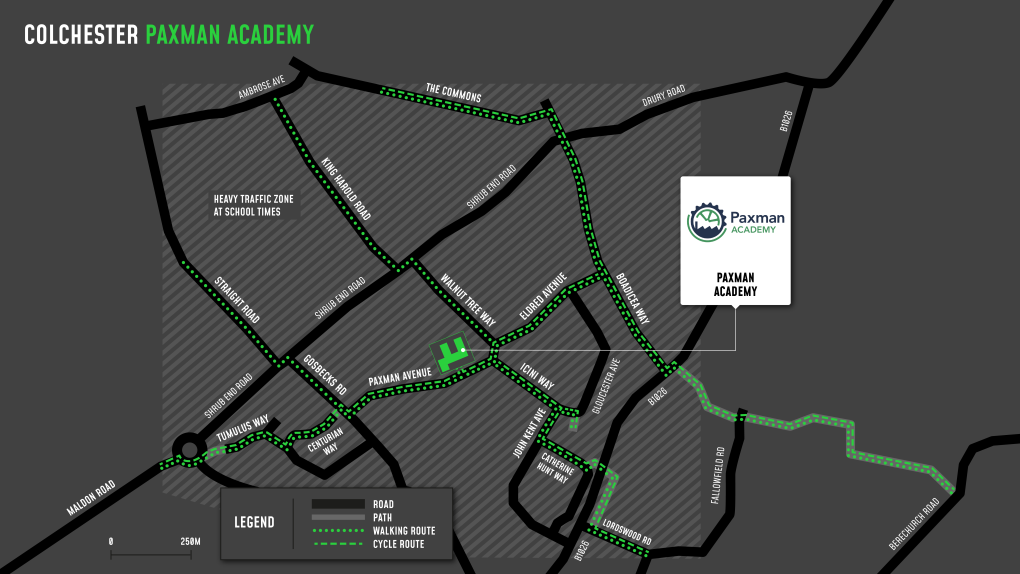 Getting to and from Paxman Academy

The estate that Paxman Academy is situated on has an excellent array of pavements, with grassy gaps between them and the road. Most of the roads have crossing islands too, where you only need to check traffic in one direction at a time when crossing. There is an entrance for walkers on Walnut Tree Way, to the east of the school. A short walk from the school, on the busier Shrub End Road into central Colchester, is a zebra crossing, helping students from that side of the academy come in on foot.

Less than 500 metres from the school in both directions are parts of the cycle network. Firstly you have National Cycle Network route 1, working its way across Colchester and into the town centre. In the other direction is Boadecia Way, an off-road orbital around Colchester. The school’s ample bike shelters are accessible from the pedestrian entrance on Walnut Tree Way, taking cyclists away from cars entering the site.

The number 64 service passes Paxman Academy, travelling between Layer-de-la-Haye and the centre of Colchester. About 300 metres from the school entrance is Shrub End Road, which is one of the main roads into Colchester, and has lots of regular bus services. Its stops have shelter and seating.