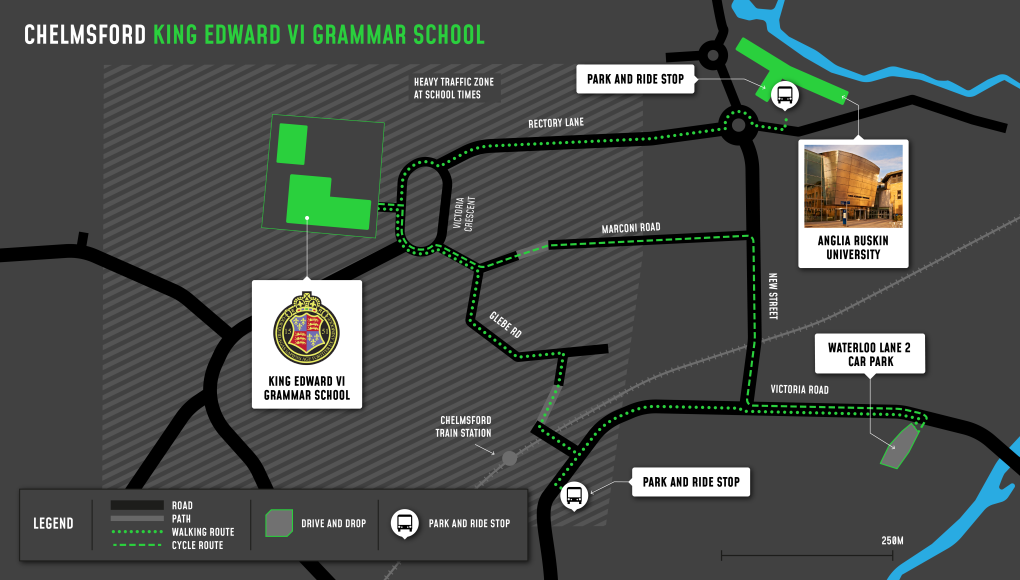 Getting to and from King Edward VI Grammar School

There’s a lot of footpaths around King Edward VI Grammar School (KEGS). They’re a perfect way to avoid traffic. From Swiss Avenue to Maltese Road, around the back of the school, or down the back of the Avenues, there’s plenty of options for walking.

Broomfield Road, where the school is, has cycle lanes on the road in both directions nearby. There are also lots of much quieter roads you can use, allowing you to bypass the congestion. The walking routes can also be used by cyclists. National Cycle Network route 1 follows the river not far from the school, joining central Chelmsford to Writtle and Chelmer Village.

Park & Ride at Chelmsford could help you on your journey.

Being on one of the main routes into Chelmsford, KEGS benefits from being close to bus services from Broomfield, the Walthams, Great Leighs and Braintree. For those going elsewhere Chelmsford bus station is about a 5 minute walk away.

Chelmsford train station has trains to and from Shenfield, Ingatestone, Witham and Colchester, amongst others. Lots of KEGS students get the train to school. Greater Anglia offer discounts on train travel for students at some schools, chat to staff about this.