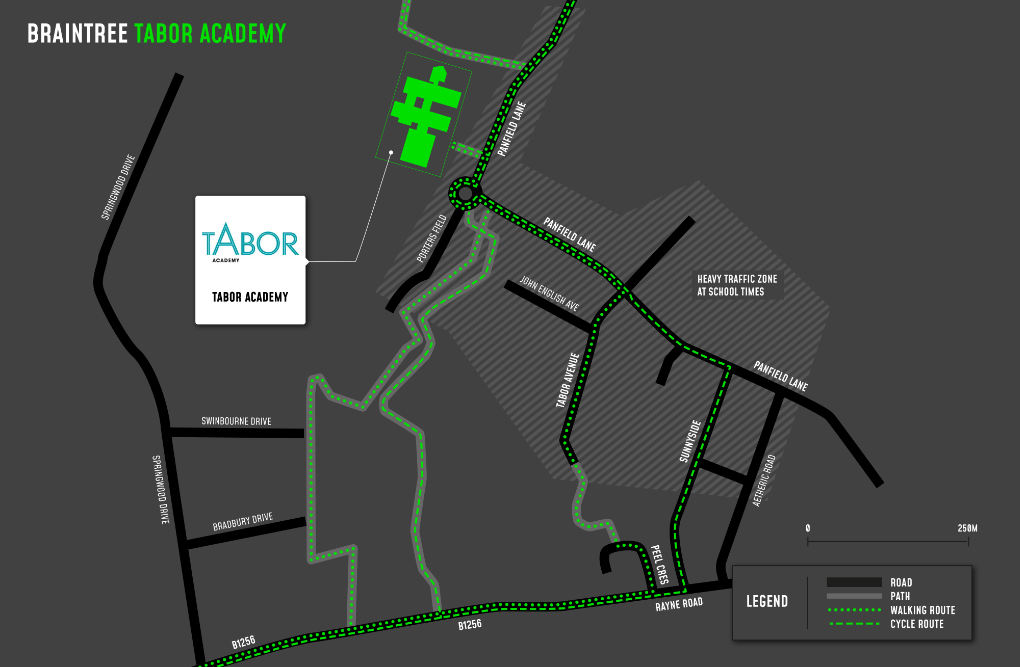 Getting to and from Tabor Academy

Tabor Academy has a zebra crossing and pavements outside which offer easy access to Braintree’s great network of footpaths. There are footpaths through the nearby estates and paths as well as crossing islands at mini roundabouts on the half-mile walk to Braintree town centre.

There are dedicated cycle paths through parks near to Tabor Academy. Just under a mile away is the Flitch Way, route 16 of the National Cycle Network, which is an off-road cycle path on a disused railway line. The Braintree cycle map provides information on cycle paths near the school.

The bus stops on Panfield Lane are just a few hundred metres from Tabor Academy. One of the services runs from many of the small villages to the north of Braintree to the town centre, passing Tabor Academy on the way. There are also bus stops on Rayne Road which have services to Rayne, Dunmow and smaller villages. It’s less than a mile to Braintree bus station from Tabor Academy, where you can get to surrounding towns and villages as well as Chelmsford and Colchester.

Braintree train station is one mile from Tabor Academy through the town centre. Hourly services provide good access to Cressing, White Notley and Witham. Greater Anglia offers discounts on train travel for students at some schools: chat to staff about this.