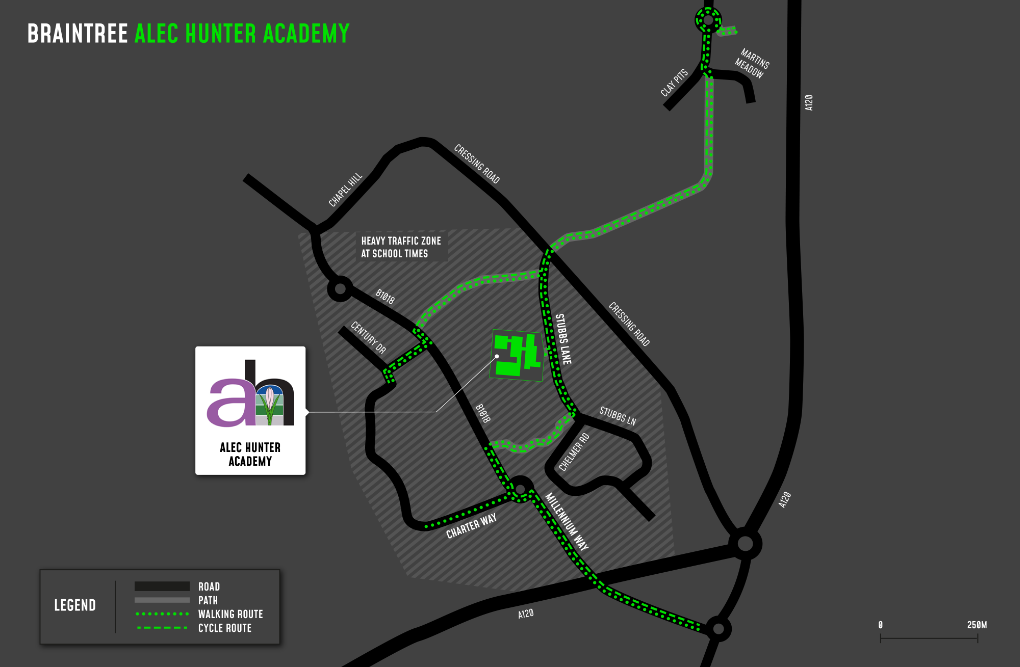 Getting to and from Alec Hunter Academy

Heavy traffic at drop off and pick up times is usual. We recommend avoiding roads within roughly 1000 metres of Alec Hunter Academy. This includes Stubbs Lane, Millenium Way, Charter Way, B1018, Century Drive, Chelmer Road and the smaller roads attached to them.

From the North – cycling or walking

From the South – cycling or walking

From the Retail Park continue straight onto Millenium Way. Turn right onto public footpath (approximately 100m from the roundabout) and follow between houses then turn left onto Stubbs Lane to reach Alec Hunter Academy.

From the West – cycling or walking

From the South West – walking only

Drop off at Charter Way Retail Park. Turn left onto Charter Way and cross the road using the zebra crossing. Turn right, follow footpath to B1018. Cross B1018 using the pedestrian island, then turn left, continue on B1018. Turn right onto public footpath (approximately 100m from the roundabout) and follow between houses then turn left onto Stubbs Lane to reach Alec Hunter Academy.

There are bus stops with services in both directions outside Alec Hunter Academy. One of the services goes to many of the small villages between Braintree and Witham as well as Braintree town centre. Braintree bus station is just over a 1.5km from the school and connects to villages and towns around Braintree, as well as to Chelmsford and Colchester.